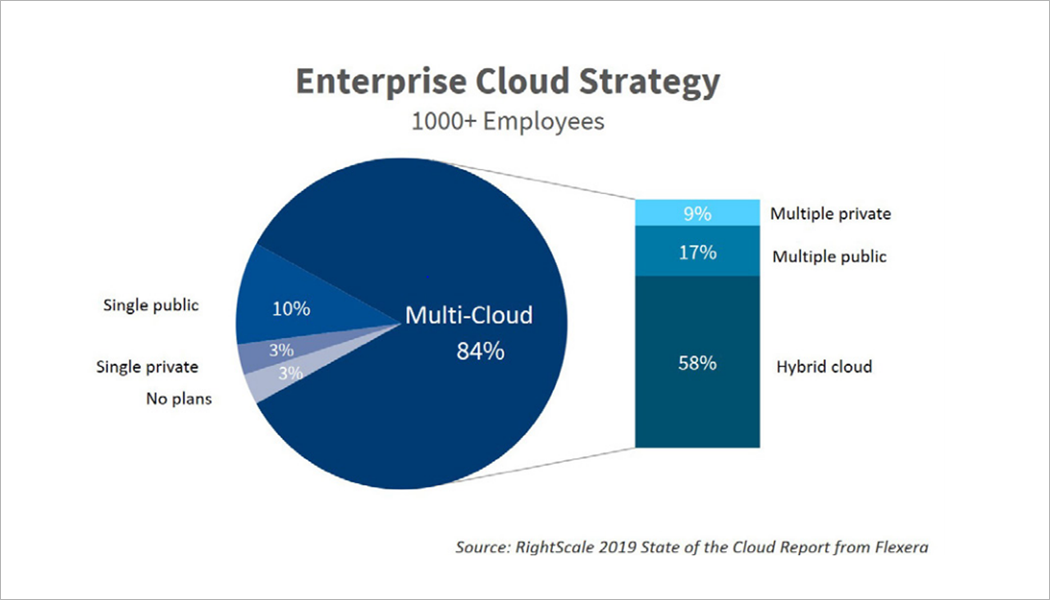 Flexera is a computer software firm that helps enterprises make better decisions by bringing intelligence and insights about the software. It recently acquired RightScale to strengthen its IT asset optimization suite.

In this article, we have curated the key findings from “RightScale 2019 State of the Cloud Report from Flexera”.

Key findings of 2019 State of the Cloud Report:

1. 84% of organizations have a multi-cloud strategy

However, the number of enterprises that want to use multiple public clouds or multiple private clouds has slightly decreased.

Small and medium sized businesses (SMBs) choose to go for public cloud adoption, with 44% of them preferring either single or multiple public clouds. 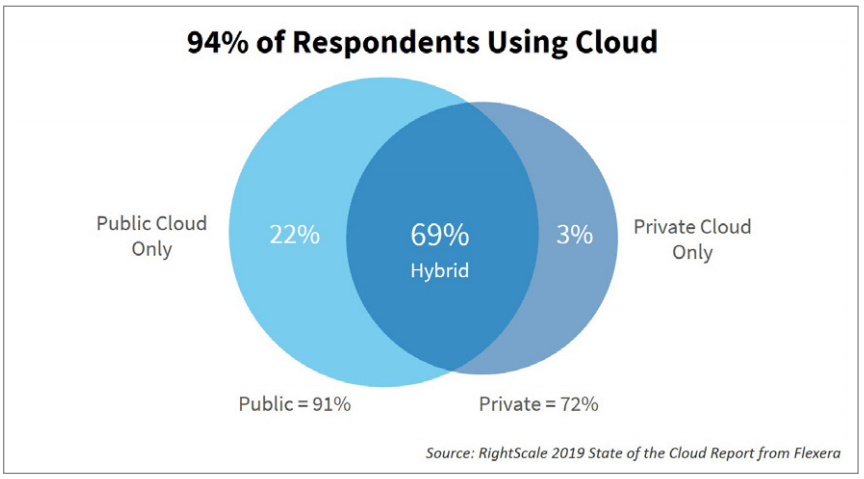 Further, the report suggests that public cloud (31%) is the top priority for enterprises, followed by hybrid cloud (28%). 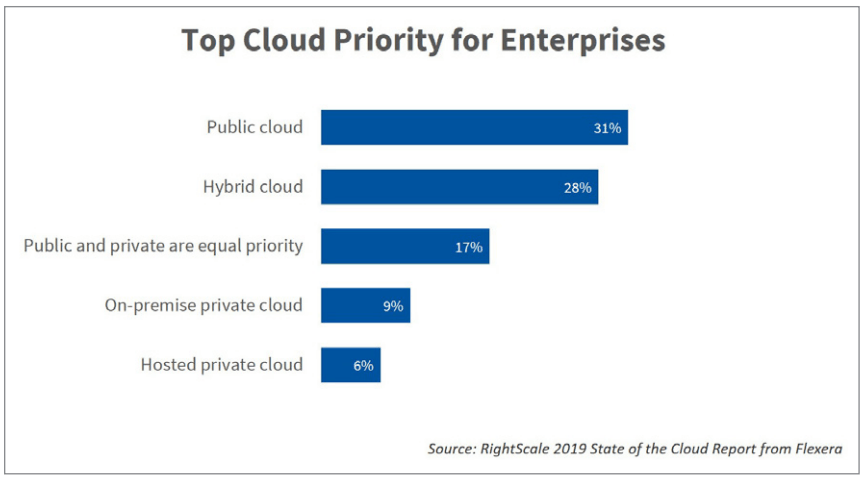 3. On average, enterprises are using around 5 clouds

Enterprises are using 4.9 clouds on average across both public and private. On average, 3.4 clouds are already in use, while 1.5 cloud is in experimentation.

With the growth in use of public cloud, the amount spent on public cloud is also increasing. The annual public cloud spending is becoming a new line item in IT budgets, especially among large organizations.

The workloads in cloud by SMBs is fewer. As a result, they have smaller cloud bills. Despite that, 11% of SMBs said that their annual cloud spend is over $1.2 million. 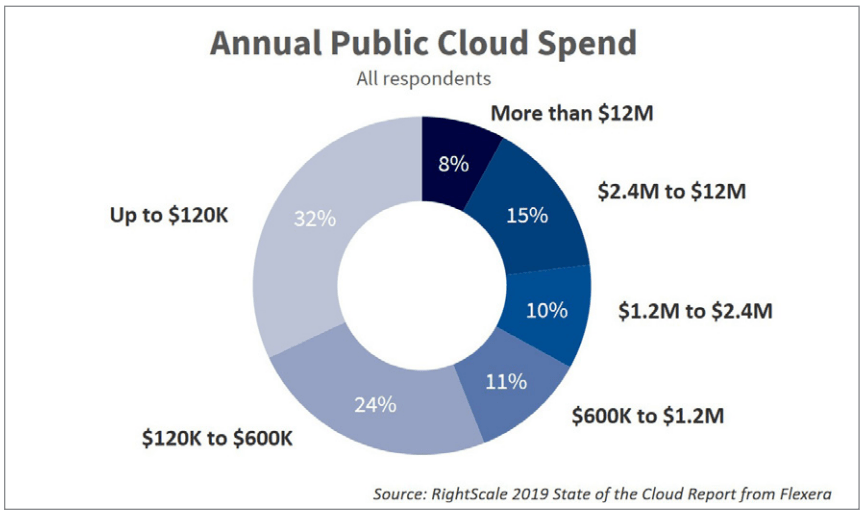 Enterprises are running 79% of workloads in cloud. Of these workloads, 38% is running in public cloud, while 41% in private cloud.

6. Over half of enterprises already have a central cloud team

To have a successful cloud-first strategy, enterprises are creating a central cloud team or a ‘Cloud Center of Excellence”. These teams are supposed to provide centralized controls, tools, and best practices to help enterprises speed up the use of cloud and reduce risk and costs.

Overall, 51% of enterprises are having a Cloud Center of Excellence, and 21% are planning to have one.

Talking about SMBs, 31% have a central cloud team, with 25% planning one.

The role of central cloud teams is to manage cloud costs, advise on applications suitable for cloud, set policies, and use automated cloud policies.

7. Governance, expertise and spend are the top cloud challenges in 2019

In 2019, 76-79% of enterprises consider governance, expertise, spend, security, and compliance as the top 5 cloud challenges.

Despite gaining more cloud experience, the management of cloud spending is still among the top challenges and is increasing. In 2018, 80% enterprises reported it as a main challenge, which has now increased to 84%.

Although enterprises are increasingly focusing on management of cloud cost, only a minority of them have started to apply automated policies for cloud cost optimization. These policies include shutting down unused workloads or rightsizing instances. 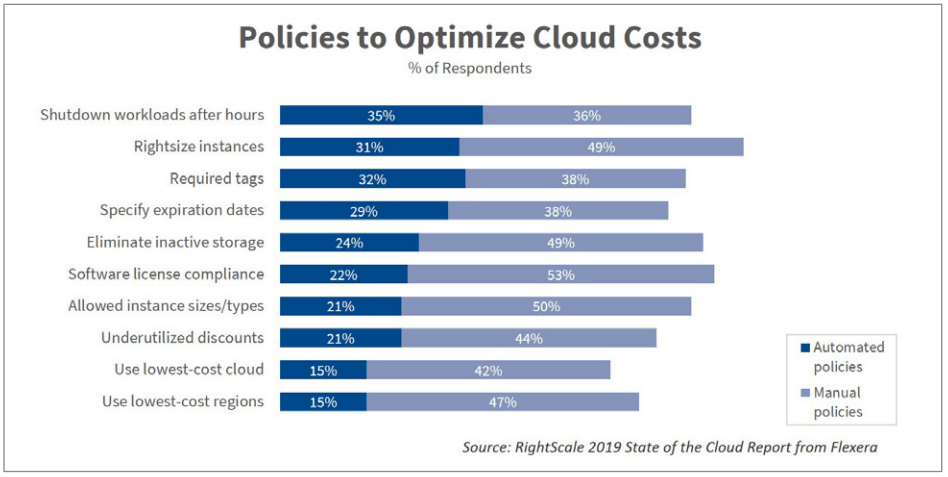 8. AWS continues to lead, but Azure narrows the gap with AWS

Azure is bridging the gap between AWS, especially among large enterprises. Its adoption in last year has increased from 45% to 52%.

Google continues to be at the third position, followed by VMware Cloud on AWS, Oracle Cloud, and Alibaba Cloud. 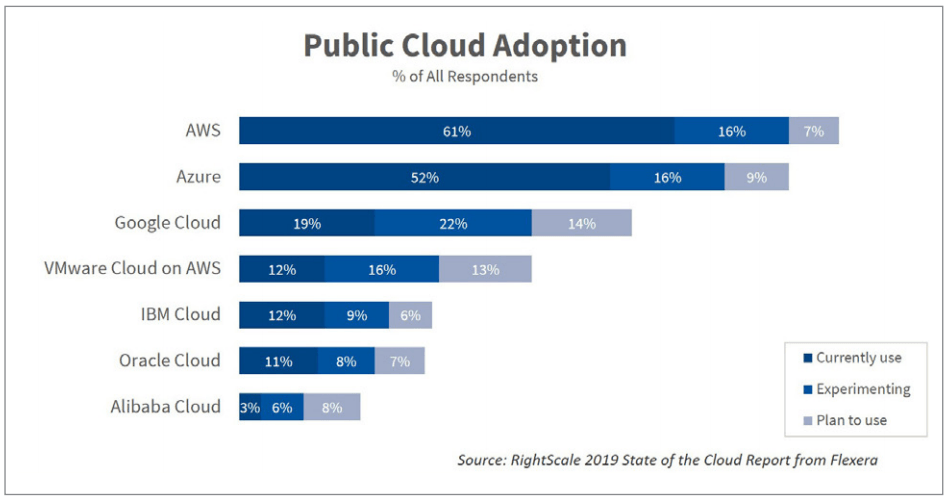 9. Docker and Kubernetes continue to be most used container tools

The use of containers has increased over the years. Docker and Kubernetes continue to be the most used container tools used by enterprises. Adoption of Docker increased from 49% in 2018 to 57% in 2019.

Kubernetes usage witnessed the highest growth, increasing from 27% last year to 48% in 2019.

Enterprises implement configuration tools as part of adoption of DevOps processes. These tools enable them to automate deployment and configuration of servers and applications. 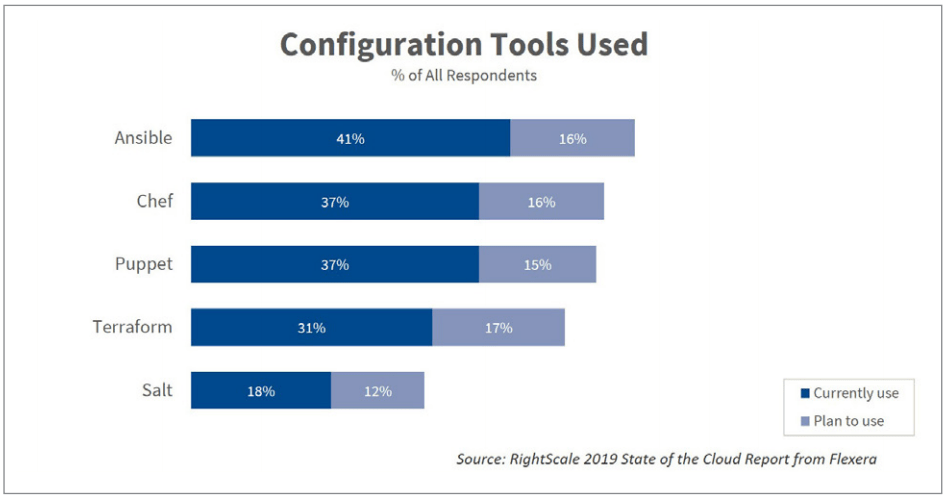 Of all the cloud services used by enterprises, the use of serverless is growing the fastest for second consecutive year. Relational DBaaS is the most used cloud service in 2019, followed by push notifications and data warehouse.

Machine learning, container-as-a-service, and internet of things (IoT) are the next fastest growing cloud services.

The full RightScale 2019 State of the Cloud Report is available here for download.

Images source: RightScale 2019 State of the Cloud Report from Flexera