Bitcoin has been steady and has outperformed most of the assets and commodities in the industry. On 21st September, Bitcoin showed gains of over 50% in the last 3 months crossing 10,000 US Dollars which was a surprise to most. Currently, the scenario is favourable for a non-correlated asset like Bitcoin where there is a pandemic situation, recession, quantitative easing or printing of money, inflation, unemployment, and lack of safe havens to invest.

Another very important factor for the rise in the prices of Bitcoin is the block halving took place earlier this year. The bitcoin halving will see the mining reward drop from 12.5 bitcoins per block to 6.25 bitcoins. This is a reduction in the supply of Bitcoin raises the prices in order to match the cost of mining one block fundamentally.

In the last decade, we have observed that whenever there is a block halving the prices of Bitcoin goes up significantly. Earlier this happened in 2017-18 when the Bitcoin prices reached its all-time high nearing 19,000 US Dollars per Bitcoin.

Gold has been steady in the last few weeks and has been enjoying interest by retail investors. Gold managed to cover its correction in March, and it is trading at around its all-time high. Looking at the Global economic situation, gold seems a very promising asset to save our money ‘physically’. Owning gold physically becomes important as the bonds issued by the institutions may be manipulated.

Something which goes unnoticed is that when the market gets access to excess money as a part of stimulus packages, this releases a higher supply of money in the market. The investors end up buying gold from that additional printed money which directly affects the demand for gold and the prices surge. This rise in price may burst when the actual impact of the recession comes into effect.

Crude, on the other hand, was known to be liquid gold or black gold but the contract prices of May went negative which has never happened in the history of mankind. The price of crude went down in a free fall and was nearing 0.01 cents for a few minutes before it went negative up to -33 US Dollars in some exchanges. This means that if you buy crude oil in the month of May, you won’t have to pay anything but rather you will get $33 to store that oil with you. There is so much oil available for use that oil companies are having difficulty storing oil. The majority of the oil pipelines across the world are full; there are thousands of vessels loaded with crude oil on the international waters waiting for the next movement orders. 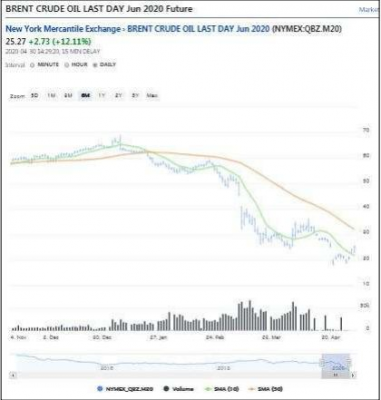 Why this happened is blamed on the oil-producing Nations mainly Russia, America, and other OPEC countries who have continued to produce oil whereas the demand for oil has reduced significantly due to the pandemic and recession. This could have been avoided if the new production of oil would have been controlled earlier.

The current price of Crude is stable but it shows no signs of an increase.

The post Bitcoin, Gold, and Crude appeared first on NASSCOM Community |The Official Community of Indian IT Industry.

Swype is dead! Here are the top 3 android keyboard alternatives